Hello there! My name is Daniel Madden, and I’m a Hypnotherapist and Psychotherapist based in Galway, along the Wild Atlantic Way on the west coast of Ireland.

I established Experience The World Different Hypnotherapy Clinic (www.experiencetheworlddifferent.com) in March 2010, and I’ve been running my private practice since then for the people of Galway, and the occasional client from outside of Galway.

All hypnosis is self hypnosis, and putting myself in trance is something I do quite a lot. Even in school, I used to induce trances in myself (I didn’t know it was self hypnosis at the time!). This was known to my teachers as ‘daydreaming’, and I spent a lot of school time daydreaming.

In the mid 1990’s, after I’d graduated as an Electronic Engineer, I came across a book called “Self-Hypnosis and Scientific Self-Suggestion” by William J. Ousby. At the time, I believed in a lot of the common misconceptions about hypnosis, and this book was an eye opener (and eye closer!) for me.

One morning in July 2014, I woke up and hit the snooze button, so I could luxuriate in bliss and comfort and daydream for another while. I knew that a lot of people can find real contentment in life by following their bliss. I asked myself, what use are sleep ins? I mean, you do get the odd intuition and flash of inspiration, but try telling your boss that you’re late because you slept in. Then tell them you slept in because you thought you might have an insightful intuitive revelation to solve some problem! Just imagine the enthusiasm of your boss after this statement.

I asked myself, what if you were to combine hypnotic time expansion with sleep in time. It would feel like you had a long enjoyable sleep in, and only ten minutes on the clock would have gone by. I started giving myself hypnotic sleep ins, and then I did extensive market research by asking a few people the following question:

“If it were possible, would you like a sleep in every Monday morning?”

There were a few people who jump out of bed energetically and enthusiastically every morning. Most people would take the sleep in if it were available. I developed the hypnotic sleep in course so anybody who enjoys a little extra time in bed can learn to have exactly that whenever they want.

Listen to Track One, which tells you:

1) A little about hypnosis.

2) A little about hypnotic time expansion.

3) About all six tracks of the Hypnotic Sleep In Course.

It takes about 15 minutes.

Search for the hypnosis download specific to what you want! 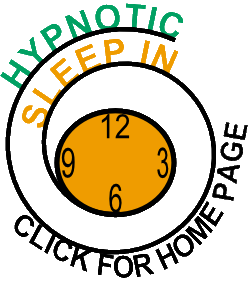